Our Staff and Board

Joel Caris comes to Farmers Market Fund with over twelve years experience in local food systems work. He first discovered his love of
local food and farming while apprenticing on an organic vegetable farm on Whidbey Island in 2009, then spent the next five years growing and raising food on farms and ranches in Washington and Oregon. He joined the Tillamook-based community food systems nonprofit Food Roots in 2015 as the Development Director and helped grow the organization significantly over the next seven years. Joel is a gardener, long-time Grange member, food preserver, walker, reader, writer, enjoys camping, loves working with numbers, and appreciates how good food can bring people together. He has lived nearly all his life in the Northwest.

Mallory Watson is a Northwest native, and she has been living in Oregon since 2008. With a background in nutrition, administrative work, and improving food access though urban farming, coming to FMF just made sense for her! Since moving to Portland in 2012, she has worked with with multiple garden and nutrition education organizations around town, and she loves teaching kids about growing nutritious food in the garden. When she’s not working on Double Up Food Bucks, she enjoys veggie gardening, bike riding, and crafting. 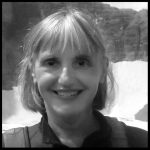 Rosemarie co-founded Farmers Market Fund and served as Board President through 2015. She was also on the Board of Portland Farmers Market from 2006 to 2011, serving as its president for two years.

Rosemarie organized and co-chaired the Portland/Multnomah Food Policy Council from August 2001 through Dec. 2004. This Council advised the City of Portland and Multnomah County on policies promoting a healthy and sustainable regional food system. She also worked with the Healthy Eating by Design program on food access and regional food planning. Other consulting work included facilitating the development of the Zenger Farm project and working with stakeholders in Lincoln City to improve their farmers market and to connect local growers with the area’s institutional purchasers.

Prior to working on sustainable food system issues, Rosemarie Sweet was the founder and executive director of Sustainable Communities Northwest (SCNW). This non-profit corporation provided affordable housing to people of low and moderate income in the Portland area, with an emphasis on ecologically sound building and promoting sustainable lifestyle choices. Prior to that, Ms. Sweet practiced law for 17 years.